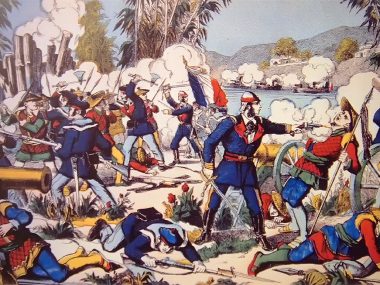 The history of French influence in Vietnam began in the XVII century, when the French Jesuit monk Alexandre de Rhodes led his missionary activity in Hanoi. He lived in Vietnam for 10 years, converted local people to Christianity, and created a Vietnamese written language based on the Latin alphabet.

The French getting and losing monopoly in trade

At the end of the eighteenth century, an event occurred that later helped the French to justify their presence in Vietnam. After the Tay Son rebellion, members of the ruling Nguyen family were killed. Only 15-year-old Nguyen Phuc Anh survived, who was hidden from the rebels by the French missionary Pigneau de Behaine, Bishop of Adran.

As a result of the agreement between the countries, France provided military assistance to Nguyen Phuc, and he granted the French a monopoly in trade throughout the country and ceded a number of lands to the French.

At the beginning of the XIX century, this treaty was declared untenable, the first decrees were issued against the promotion of Christianity, and the persecution of missionaries began.

In 1857, the French representative Charles de Montigny arrived in Da Nang. He was supposed to achieve freedom for christians and establish trade and diplomatic relations between the countries. The Vietnamese did not accept his official message. The French bombed the city’s fortress, but achieved nothing.

The execution of two Catholic missionaries from Spain in Vietnam was a formal pretext to start the Cochinchina Campaign. A punitive expedition was sent to the country in 1857.

The Vietnamese offered serious resistance, but in 1859 their army was defeated by European troops of the French and Spanish, who had already fought in the Philippines and were accustomed to the local climate. The French occupied Saigon and large territories in different parts of the country.

As a result of the peace treaty in 1862, France obtained three Vietnamese provinces. It took a long time to approve the treaty. Meanwhile,  the fighting resumed, and in 1867 Vietnam made peace with France on even tougher terms.

The colonial war was fought to seize Tonkin (now a territory in the Northern part of Vietnam). Due to the Sino-French War in 1884, the French had to withdraw some troops from the country, but despite the difficulties, the campaign was completed and Vietnam came under French control in 1885.

The country was divided into the colony of Cochinchina and two protectorates, Tonkin and Annam. Cochinchina was under the jurisdiction of the Department of Commerce and Colonies. The French Ministry of Foreign Affairs was controlling the protectorates.

The territories of Vietnam, Cambodia and Laos were united into an administrative entity, called the Indochinese Union.

The French President was represented within the colony by the Governor-General.

According to the French, small feudal lords could help in the implementation of the plans of the colonial administration, so their privileges were preserved. The authorities kept the Imperial court in Vietnam and the Royal courts in Laos and Cambodia.

Popular uprisings broke out on the territory of the colony more than once and were violently suppressed. At the beginning of the XX century, revolutionary ideas began to spread among the intellectuals, and in the 20s the first communist organizations appeared. The Communist Party of Vietnam was created by Ho Chi Minh on February 3, 1930 in Hong Kong.

On February 10, 1930, the Vietnamese soldiers who had been forced to serve in the French colonial army raised a revolt against the French at Yen Bai post (North Vietnam).  However, due to the weak organization of the protests, the colonizers quickly suppressed the mutiny. After the defeat, many participants of the mutiny were executed or exiled to hard labor. Among the executed rebels were many members of the Nationalist Party of Vietnam (the first major revolutionary organization in Vietnam) led by Nguyen Thai Học.

Organizing the Viet Minh and expelling the French from Vietnam

During World War II, France was occupied by Germany and Vietnam fell into the sphere of influence of Japan. Japanese troops invaded the country in 1940. In order to gain the trust of the Vietnamese, the Japanese leadership demonstrated its good attitude to the political elite, and also enlisted the support of the Cao Dai religion, which had an influence on the poorly educated peasants.

Despite the fact that power was formally in the hands of the French administration, in reality all decisions issues were made by the Japanese.

In 1941, Ho Chi Minh had established a military and political organization of the Viet Minh. Members of the organization called on the population to fight against the French and Japanese occupiers. At first, agitation was among peasants, then the Viet Minh began to attract to its side urban workers and the petite bourgeoisie.

In the spring of 1945, under the onslaught of the Japanese, the French administration in Indochina was liquidated, and the French troops were disarmed. The Japan’s control of the country did not last long. By this time, the influence of the Viet Minh had become large-scale and a mass uprising was prepared, that made the Japanese troops capitulate. A provisional government led by Ho Chi Minh was created, and on September 2, 1945 the establishment of the Democratic Republic of Vietnam was officially announced. On this day, Vietnam celebrates its Independance Day every year.