The unicorn dance (múa Lân) and the lion dance (múa Sư Tử) look very similar for the observer. Even the Vietnamese can not always correctly distinguish one dance from another. However, there is an important difference in the costumes of the characters: lions never have horns. Unicorns can have a horn in the middle of the head, or go without it.

One person performs the movements of the head of a unicorn (or lion), the other, covered with an embroidered cloth with a fringe, symbolizes the body of the animal.

The unicorn and the lion are talismans of peace and security.

In the traditional worldview of the Vietnamese people, the unicorn is one of the four sacred talismans, along with the fish, the grus and the lion (or tiger). In religious institutions (temples, palaces, tombs and shrines) of Vietnam, the image of a ferocious lion, baring its fangs and rolling its eyes, is found often. These lions are symbols of the power that governs the universe. According to myths, evil spirits simply have no chance if confronting them.

The unicorn, like the dragon, is a mythical, nonexistent animal. The people created the image of a unicorn, a horse with a lion’s head. In Four Noble Truths, the unicorn is regarded as a symbol of peaceful desires, living in harmony with everyone. 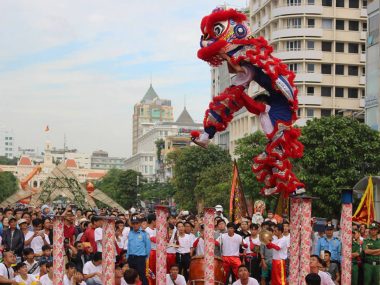 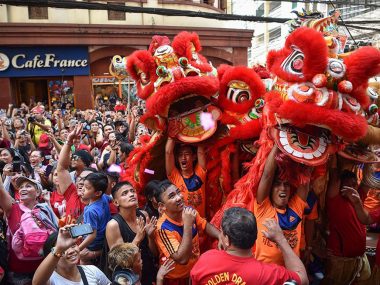 The legend of the origin of the lion dance.

The legend of the origin of the lion dance is associated with the confrontation of Chinese dynasties in the 5th century. The story goes that in 466, the Emperor of the Northern dynasties of China Wen of Sui attacked the southern army, which used war elephants to repel the enemy. This formidable force prevented the northerners from winning for two battles and they were looking for a way to neutralize the elephants. Then the wise commander suggested that elephants would certainly be afraid of lions. Since these animals had never lived in China, they decided to make dummies out of paper and fabric with wide toothy mouths. Soldiers climbed into the lion’s skins made of cloth and set the structure in motion two by two.

On the decisive day, the “lions” lurked in the bushes, and on the battlefield, the troops placed pit traps for elephants. When the “lions” suddenly jumped out during the battle, the elephants fled in terror, throwing off their riders and crushing their own troops with their feet, falling into the camouflaged pits. Therefore, the southern Imperial troops defeated the enemy from the North, and the lion dance became a part of court festivities.

In folklore, the unicorn and lion dances have two forms.

There are two forms of unicorn (lion) dance: 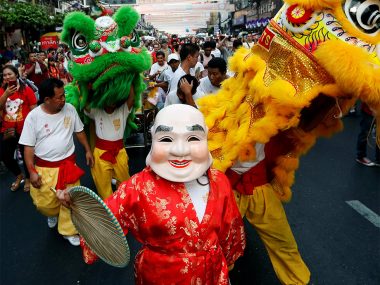 Any dance is always accompanied by Mr. Dia (óng Địa) – the Vietnamese household and luck spirit, described in detail in our article about the dragon dance.

At all the festivals the dancers in the costumes of the lion or the unicorn go by the streets, entering houses, cafes and shops. And everyone makes offerings for them (in cash). Sometimes, the owners put the offerings on a high bamboo stick, then the dancers perform acrobatic tricks, imitating a living tower with the head of an animal, which swallows the gifts. Sometimes, such entertainment turns into a competition of teams of dancers and, the more worthy the award, the higher the level of skill is required to get it.

Getting the offerings is not the final goal for the dancers. Their goal is to go to the houses and welcome the holiday, bow to the elderly, entertain children. As you may already know, the Vietnamese are very cheerful and they like to have fun. Lions and dragon dances are popular entertainments.

There are many kinds of unicorn (lion) dances. The teams with one unicorn or a lion perform a rhythmic dance with jumps in height and the forming of the pyramids. The dances of two unicorns symbolize the interaction of Yin and Yang, the harmony of the male and female. The three unicorns in the dance, dressed in three colors, red, black and yellow, symbolize brotherly love and prayer for virtue between people. When four unicorns dance together (white, yellow, red, black or blue unicorn or lion), they symbolize the four seasons, the four sides of the world and the four elements, expressing the fullness of the universe.

The unicorn or lion dances are not only performed  during big national holidays like the New Year, but also on birthdays of the rich, the opening of cafes, hotels, even bank branches.

If you ever visit Vietnam, we hope you could meet your lucky unicorns or lions.