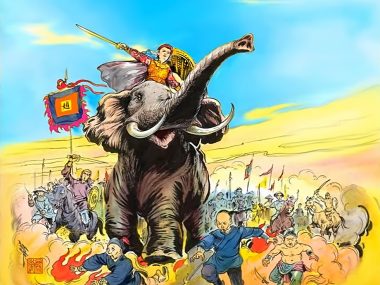 Vietnamese culture is full of stories and legends that turn real people into mythical characters. The historical data about the uprising against the Second Chinese conquest, which was led by a young Vietnamese girl who became the national heroine of Vietnam, aslo has become a part of the legend.

Today, she is respectfully called lady Trieu, but in 248, Trieu Thi Trinh was barely 19 years old.

Unbearable taxes were imposed on poor peasants in Vietnam by the viceroys during the Second Chinese conquest of Vietnam, which lasted more than 500 years from 43 to 544. The young woman was tired of watching the hard life of the Vietnamese people under Chinese oppression day after day and inspired thousands of Vietnamese to fight the invaders.

Uprising of 19-year-old Trieu Thi Trinh: the beginning of the path.

This story happened so long ago that sources do not agree on the accuracy of some data, and even the exact name of the heroine is controversial. However, both the old chronicles and recent research paint a similar picture.

In 226, a girl was born in the Kuan Yen mountain area in the Xu Than district (Thanh Hoa province today). At an early age, she lost her parents and became an orphan. The future lady Trieu was raised by her older brother. Her brother Triu Cuoc Dat was the leader of the local settlement and served as the district commander. The grown-up Trieu Thi Trinh was skilled in martial arts and had an iron will.

Historians point out that Trieu is responsible for the murder of her own brother’s fiancée, whom Trieu considered cruel. But in the end, the brother of Trieu fought a rebellion led by his sister, shoulder to shoulder.

“I would rather cut off the head of a sea monster than bend my back as maid or concubine” – such speeches are attributed to Trieu Thi Trinh in “The brief history of Vietnam”, written in 1921 by the Vietnamese politician Tran Trong Kim.

Unable to tolerate the oppression of the invaders, united with the army of her brother, the girl gathered rebels to revolt against the domination of the conquerors. Very soon, military action was launched in the occupied region. The chronicles depict the image of a warrior woman riding an elephant in yellow robes. Trieu called herself “the general in the gold dress.” This is how you see he legendary lady Trieu in the canonical illustrations in the temples that glorify her feat. The soldiers respected her and revered her as a saint.

In 248, as a result of the 19-year-old Trieu uprising, the Chinese Governor of Giao Chi (that’s how the captured Vietnamese region was called in China) was killed.

The Chinese government, angered by the revolt of the subdued Vietnamese, sent an army of 8,000 soldiers to the rebellious province with the order to suppress the outbreak of the uprising. The rebels’ battles with the Chinese continued for six months, but Trieu was defeated. After losing her army, Trieu Thi Trinh fled and committed suicide.

After her death, the Vietnamese believed that the immortal spirit of “the general in the gold dress” continues to protect the land of the Viet from invaders. Since then, the soldiers of Vietnam hear the roar of elephants and the noise of the rebellious army of Trieu in difficult battles.

The uprising led byTrieu Thi Trinh did not end the Second Chinese conquest, but allowed the people to feel free will and endure nearly two centuries of heavy expansion before preparing for the next rebellion.

American Professor David Marr dedicated pages of his study of Vietnamese history, written in the early 20th century, to the personality of Trieu. According to his information, taken from historical records, this was a woman 2.7 meters tall with huge breasts that she threw on her back, and a voice that sounded like a temple bell. She ate dozens of plates of rice and walked hundreds of kilometers a day. This is how the Vietnamese saw their “general”.

A legend found by Marr in the annals says that the Chinese underestimated Trieu, because she was a woman (there was a rigid patriarchy in China). But Trieu was winning. And the Chinese commander could not stop it until he came up with a trick. He ordered his army to strip naked. Trieu saw this and retreated in disgust. Her army was defeated without a leader.

David Marr also describes the legend that the spirit of the deceased pursued the Chinese commander who defeated the army of Trieu. He only managed to get rid of the obsession by hanging 100 penises around his house.

After 3 centuries (in the middle of the 6th century AD), when Vietnam managed to free itself from the Second Chinese conquest, the Vietnamese Emperor Ly Nam De of the new ruling dynasty ordered the construction of a temple celebrating the courage of lady Trieu and her devotion to her people. The warrior received many posthumous titles from the Emperor. The real girl became a legend. Hymns are sung about her, and she’s called the Vietnamese Joan Of Arc.

The uprising of Trieu was the last women’s uprising (we have already written about the Trung sisters’ rebellion). With its end, the ideals of Lac Viets fell into disrepair.

In many cities in Vietnam, you can find a street named after Ba Trieu (lady Trieu). The Vietnamese build temples in her honor, make cartoons, draw her, and honor her memory.