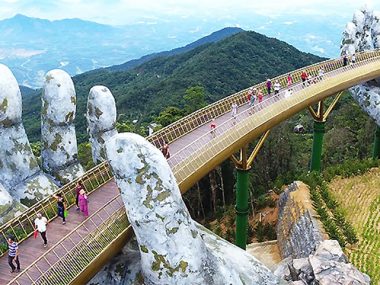 The Vietnamese city of Da Nang is a popular seaside resort. Da Nang is famous not only for its beaches, but also for the river embankment with beautiful bridges. The bridge in the form of a dragon and water-fire show, arranged here on Saturdays, attracts many visitors to the waterfront, both tourists and locals. Recently the Vietnamese architects decided to please bridge lovers with a new construction and built a Golden Bridge in Ba Na Hills Park, which became popular among the travelers very quickly.

Golden Bridge, the new bridge at an amusement Park of Ba Na Hills

The new Golden bridge is located not in the city itself, but outside of it, in the country’s famous amusement Park of Ba Na Hills. This Park is located at 1500 meters above sea level. European style architecture of buildings in the Park, beautiful views from a height, a cable car, a Buddhist pagoda, and now a new Golden Bridge attract visitors here. 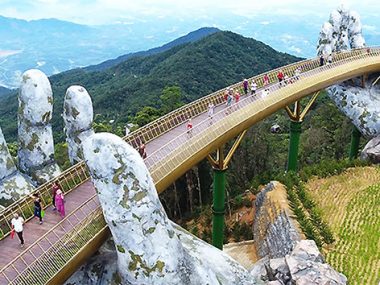 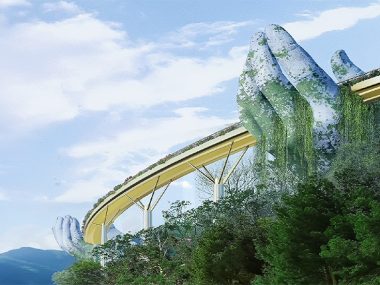 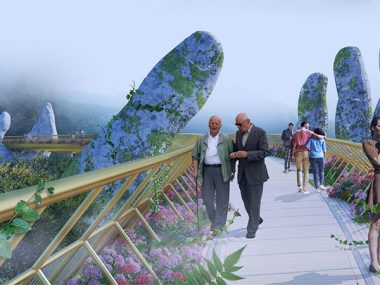 What is remarkable about the Golden Bridge in Da Nang

The Golden Bridge was built in April 2019, and was opened to the public in June. This Bridge is located at 1400 meters above sea level. The Golden bridge is 150 meters long. It is built as if it is held by two hands. Giant stone hands  are specially aged, which creates the illusion of antiquity. Looking at the bridge, it seems that someone is holding a silk cloth of golden color. The edges of the bridge are decorated with flower beds with beautiful purple flowers, that perfectly accentuate the golden hue of the structure.

Tourists here not only admire the beauty of the unique bridge. They are impressed by the splendor of the landscape around. A walk among the clouds gives lots of bright emotions, and photos taken against the backdrop of majestic mountains help to preserve memories for a long time. This place has already become very popular for wedding and romantic photo shoots.

Photos and videos of the bridge immediately appeared on many sites about Vietnam and in social media. Such advertising has already served as a huge impetus to attract tourists to the amusement Park.

Ba Na Hills Park is located 35 kilometers away from Da Nang city. You can get there by taxi or by buying a tour in Da Nang.