ATTENTION! Despite the coronavirus COVID-19 pandemic you can book airport transfer and intercity transfer in Vietnam. We arrange safe transfers between cities and provinces of Vietnam. 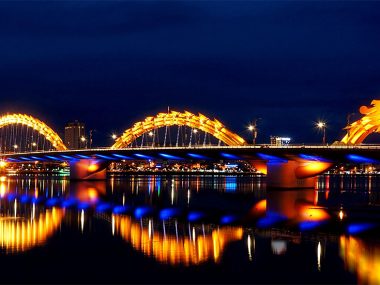 Dragon, the mythical creature, has a prominent place in the culture of Vietnam. The most important Vietnamese legend is associated with a dragon. According to this legend, the half-dragon Lac Long and the fairy Au Co, the daughter of the king of birds, fell in love with each other. As a result of their union, 100 eggs appeared, and the first viets hatched from those eggs. Thus, all Vietnamese consider themselves descendants of the dragon. You can see dragons during some of the traditional festivals in Vietnam. Artists wear colorful costumes and perform a spectacular dance to loud music. People also want to immortalize dragons in many sights. The territory of pagodas are often decorated with the elements in the form of dragons or entire sculptural compositions associated with these characters of local legends. In Cam Ranh, for example, there is a temple made of shells and corals, on the territory of which there is a tunnel in the form of a dragon. It is believed that a person who has passed through a dark tunnel is cleared of all bad things. 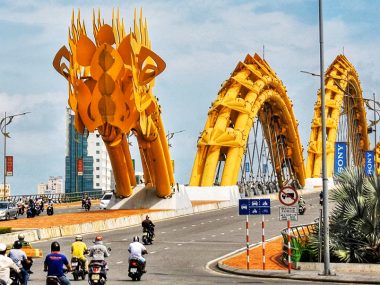 One of the most famous Vietnamese Vietnamese sights, made in the form of a dragon, is the Dragon Bridge over the Han River in the center of Da Nang. The design of the bridge is very impressive. Its length is 666 meters, and it weighs more than 1000 tons. The bridge is 37.5 meters wide and allows cars and mopeds to move along a six-lane road. There is also a pedestrian sidewalk on the bridge. The construction cost was $85 million. The bridge was opened in 2013. The Dragon Bridge is beautiful in the daylight, but it becomes even more attractive in the evening, thanks to the lighting. The modern lighting system, which includes 15,000 led lights, is designed so that you can constantly change the lighting of the bridge. At the same time, picturesque reflections appear on the surface of the water, duplicating the bridge. The dragon’s head is designed specifically so that a jet of flame or water can erupt from its mouth. On weekends, a pyrotechnic show is held on the bridge. Traffic stops, and flames and then water spew out of the dragon’s mouth for 15 minutes. Locals, especially those who want to entertain their children, come to see the show, as well as travelers. The spectacular show can be admired not only from the land, but also from the water, since some river walks are held in the area of the bridge.

Other bridges of Da Nang 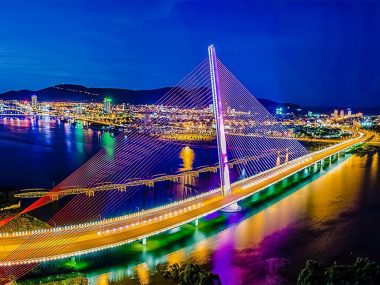 By the way, the other bridges in Da Nang are also very beautiful. For example, the Tran Thi Ly Bridge near the Dragon Bridge. It was commissioned in 2013 and has received several international awards for its innovative design. It is believed that the sail formed by the suspension cables of the bridge, symbolizes the city’s aspirations for development and future prospects. 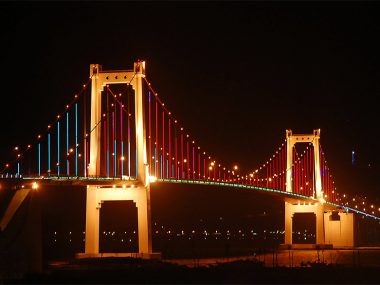 Another beautiful bridge in da Nang is the Han River Bridge. The bridge is 487.7 m long and 11.9 m wide. Residents of the city are proud of this construction, since it’s a drawbridge. It raises only on weekends and it takes about an hour. At this time, boats and ships pass under the bridge. At night, this bridge is brightly illuminated, which also attracts the attention of those strolling along the promenade.

We also have a separate article about the new magnificent Golden Bridge in Da Nang. It was just opened, and it has already become famous all over the world.</p