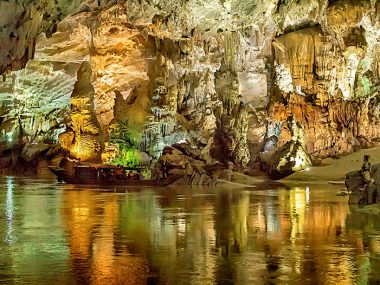 Vietnam is famous for its beautiful scenery — beaches, islands and bays, beautiful mountain peaks and mysterious caves. Phong Nha-Ke Bang national Park stands out among the many nature reserves. This Park is undeservedly ignored by many tourists, more eager to get to the sea. Phong Nha caves are located in the central part of the country. Nevertheless, they are worth visiting, since UNESCO has listed Phong Nha-Ke Bang national Park as the World Heritage Site.

Many people, having seen photos of this area, agree with the statement that the nature and landscapes of the Park resemble the lost world. According to some sources, some episodes of King Kong films were partially filmed here. The national Park was created in this part of the country to protect the forest resources, biodiversity of the area and the karst zone, which contains about three hundred caves and grottoes.

The landscape of the area is represented by mountains and narrow valleys with rivers that are fed by groundwater, jungle and, of course, the caves, the most important thing attracting travelers here. Some of them are worth to be described in more detail. 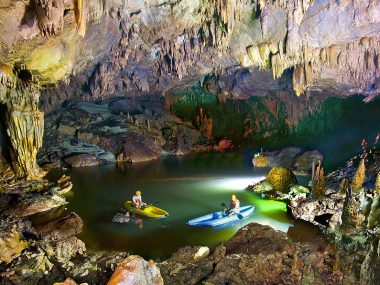 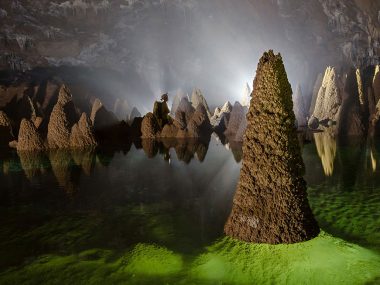 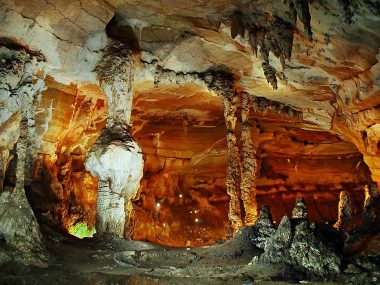 Some caves are unique in their size and beauty. For example, here is a cave recognized as the largest in the world among all the known caves. It’s called Son Doong. The height of the cave in some rooms reaches two hundred meters and the width – one hundred and fifty meters. However it is quite difficult to get to this cave. It was discovered recently in 1991 (previously, the locals were afraid of strange sounds that came from the cave, produced due to the flow of an underground river), and the cave was explored only in 2009. Today many tourists from all over the world want to assess the scale of this natural miracle. Therefore, you need to sign up for the tour in advance. In addition, it is not just a walk, it is a real journey through the underworld, that requires good physical health. The cave is interesting because it has its own life with its own microclimate. There is an underground river flowing, its own jungle and wildlife blooming, and even some clouds forming.

The national Park is famous for and other records, for example, Son, the longest underground river in the world is located in the Phong Nha cave. Nature has created some amazing stone formations in this cave. Many of them have names, such as “Buddha”, “Royal court” or “lion”. The cave is composed of 14 main rooms, in addition to multiple passages, going in different directions, that are dangerous for research because of the erosion of limestone.  Stalactites and stalagmites of the Phong Nha cave create a truly fabulous atmosphere.

This cave was formed tens of millions of years ago, and discovered by a local resident in 1935. The cave is almost one kilometer long. As in the Phong Nha cave, there is a large number of beautiful stalactites and stalagmites here. Interestingly, if you hit them, you can hear amazing sounds that resemble the sound of drums or gongs.

Before the Son Doong cave was discovered, this cave was considered the longest in the Park. It is called the Paradise cave because of the beauty of the stalagmites and stalactites located here. The height of the cave in some areas reaches a hundred meters and a width of one hundred and fifty meters.

Speaking about the fauna of the Park, it is very diverse. New species of animals that had not been previously encountered in the country were discovered here. The Park is home to Gibbons, macaques, surilis, langurs, steinbocks, Himalayan and Malay bears, Javanese lizards, bats, including the species listed in the Red List of Threatened Species. About 100 species of reptiles and 50 of amphibians were found in the park.

The Park is open to tourists; the travelers are transported by boat by the river Son to the main caves. Tourists can choose from a variety of programs to choose from, which differ in cost. Those who are into some activities, can go mountaineering, visit caves and waterfalls, go rafting on the river Tay, explore the local flora and fauna and see the fields with grazing buffaloes.